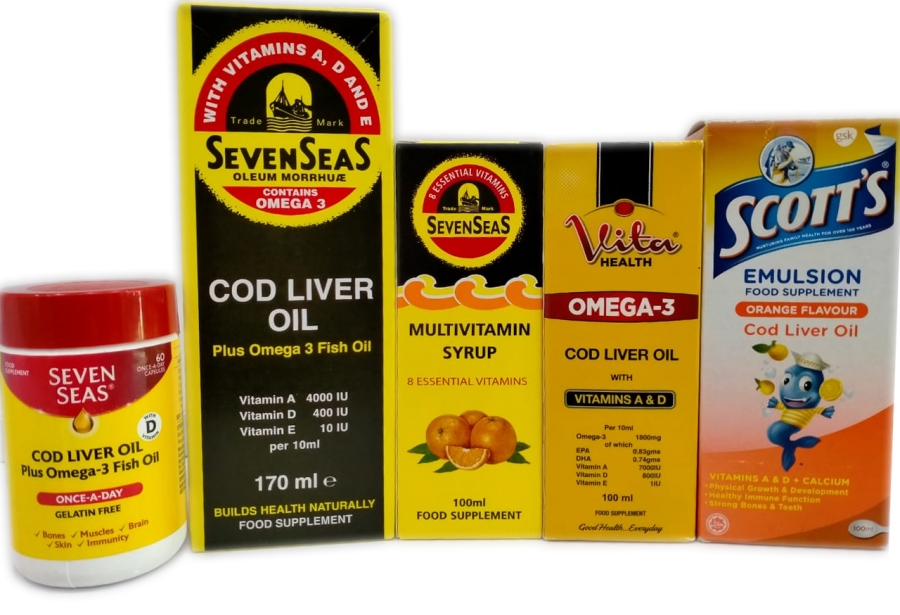 Most Omega 3 and fish oil supplements available in Kenya come in combination with Vitamins A, D and E

Vitamin A is a fat-soluble compound which acts as an antioxidant in the body. Antioxidants are substances that prevent damage to normal cells caused by free radicals-unstable molecules that the body produces as a reaction to environmental changes and other pressures that are  encountered by our cells. Vitamin A maintains healthy eyes and skin. It is vital for growth and development of an unborn baby, cell recognition, vision, immune function, and reproduction and helps the heart, lungs, and kidneys.

Vitamin D increases the uptake of calcium in the body which is necessary for strong bones. Without sufficient vitamin D, bones can become thin and brittle which might put one at risk of fractures. Vitamin D sufficiency prevents rickets in children and osteomalacia in adults. Together with calcium, vitamin D also helps protect older adults from osteoporosis-a condition characterized by brittle bones which break easily. Vitamin D has other roles in the body, including control of cell growth, normal muscle and immune system function, and reduction of inflammation. Very few foods in nature contain vitamin D.Fish liver oils are among the best sources of vitamin D while small amounts of vitamin D are found in beef liver, cheese, and egg yolks.Exposure to sunlight is highly recommended for more Vitamin D.

Cod liver oil is naturally rich in two essential omega-3 fatty acids – DHA and EPA, which helps to maintain the body’s metabolism and circulation as well as maintain overall health. It helps with normal brain development, heart health, allergy and asthma as well as fatigue.
They are commonly found in plant oils and from marine animals. Other sources of omega 3 include fish and eggs from chicken fed on DHA and EPA sources. Humans and other mammals are unable to synthesize omega 3 and can only be obtained through diet.

Seven seas is a rich source of omega 3 which has many benefits to the body:

Omega 3 may improve heart health by:

Several studies have also showed that if pregnant women take omega 3 supplements, their children are less likely to develop asthma after birth. However, once asthma or an allergy has developed, it may take longer than 9 months of omega-3 fatty acid consumption to experience the health benefits.

The omega-3 fatty acids found in fish oil play important roles in brain function and development. There are also claims that fish oil can improve brain function in people with memory problems, such as those with Alzheimer’s disease or other cognitive impairments. Omega seem to have important roles in the developing baby’s brain. In fact, several studies have correlated pregnant women’s fish intake or fish oil use with higher scores for their children on tests of intelligence and brain function in early childhood

Omega 3 fatty acids are also vital for the maintenance of normal brain function throughout life. They are abundant in the cell membranes of brain cells, preserving cell membrane health and facilitating communication between brain cells. Low levels of omega-3s may accelerate brain aging and contribute to deficits in brain function.

Omega fatty acids have exhibited the ability to deal with fatigue.

Talk to your pharmacist/Doctor if you are on anticoagulants-medicines that slows down the rate of blood coagulation.